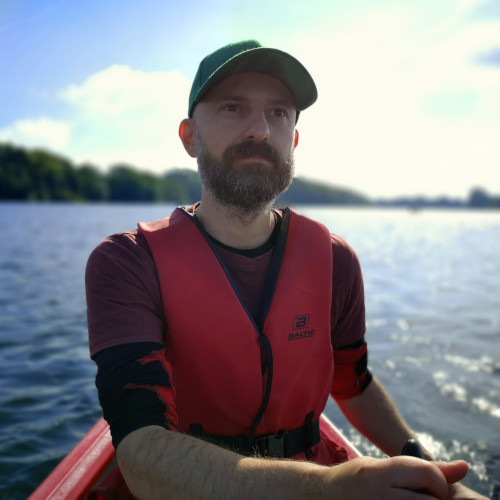 I am a scientist with the Department Evolutionary Theory at the Max Planck Institute for Evolutionary Biology in Plön. My research combines mathematics with empirical data to understand some of the myriad ways in which ecology and evolution interact across multiple levels of biological organization.

My primary interest is in microorganisms: spatially localized autocatalytic sets of molecules and chemical reactions, also known as cells, interacting with their environment, including other cells. These processes take place in a diverse range of environmental arenas and they are shaped by, and are shaping, those environments.

My current research can be grouped into three main areas, with large overlaps between them:

Microbiota and Symbiosis
Sometimes the environmental arena of evolution happens to be another organism. I study the resulting multilayered dynamics of populations that reside in other organisms, which are themselves part of a dynamic host population.

Host-Virus Coevolution
Viruses are responsible for the turnover of vast amounts of biomass, but they also help maintain diversity and facilitate horizontal gene transfer. I am interested in antagonistic coevolution, but also in the more subtle, sometimes even beneficial, effects viruses can have on their host populations.

Evolutionary Theory
While I usually aim to connect my theoretical work as directly as possible to empirical data, I also enjoy exploring mathematical models from a dynamical systems point of view and by computational methods.

Before embarking on my scientific journey I learned the art of programming as a software developer at Bertelsmann and arvato Systems in Gütersloh, Germany. I studied in Osnabrück earning Diploma and PhD degrees in the Theoretical Systems Science group of Horst Malchow, and then joined Ivana Gudelj's Evolutionary Systems Biology group at the University of Exeter in the UK. I then spent two years as a lecturer with the Ecology and Ecosystem Modelling Group of Ursula Gaedke at the University of Potsdam, before arriving in the lakeside town of Plön. More details can be found in my CV.